As one of the leading electrical companies in Perth we get a lot of questions about solar and renewable energy so here’s a bit about how solar actually works and why they are so easy and cheap to install! 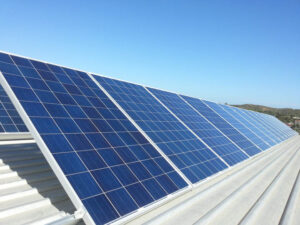 How do solar panels work?

Solar panels get their power through photovalic cells this simply means that the cells convert sunlight into electricity. Photovalic cells work by allowing photons- or particles of lights to knock electrons free from atoms; this movement or chain reaction is what creates electricity. The structure of the cells can be described as a sandwich- two slices of bread and some filling between. The two slices of breads consist of different materials. Both sides are generally made of silicon however much like a magnetic field each slice of bread needs to have opposite poles (one negative and one positive). In order to do this one side has phosphorous added to the top layer (giving it a negative charge), the other slice has boron added (to create a positive charge). The sandwich filling is made up of multiple components which actually catch the electricity being created. Although there are other types of solar power such as thermal or concentrated, this method is what you will commonly see in solar panels.

Why should I install solar panels?

Homes in Perth soak up about 8 hours of sunlight a day giving us access to a mountain of energy through solar power. The best part though is that the costs of solar panels are actually reducing. As a major installer our Perth electricians always shock (pun intended) our customers with how affordable going solar actually is.

The main reason many are going solar is because they notice this price drop that not only helps the environment but also the wallet. The main cause for this price drop is that the cost of production has dropped and keeps dropping.  For example in 2011 it cost about $1.31 a watt, jump forward to 2014 it costed $0.50 a watt! Solar panels are a cheap alternative that gives you access to unlimited energy and almost all Perth electricians have in depth experience in these services due to it growing popularity.

Although install prices are dropping this is not the only reason why the people of Perth are opting for solar. The fact is that installing solar panels is an investment. The graph below shows a perfect example. The graph is of the power usage of a home in Canberra that had solar panels installed. Now when the units are installed the only future costs would be for upgrades or upkeep, so basically there’s not a lot of costs, you will only need to pay for energy from the grid as a backup if your solar panels have no storage of power left. Which lets be honest Australia does get quite a bit of sun. So the orange line of the graph is what we want to focus on, this line show the exact times that the home connected to the power grid.

As you can see it rarely ever had to connect so the homeowners only had to pay for electricity for those short periods of time. How amazing is that!

So you can see here that installing solar is the future and the best option for all homes and properties. As prices continue to plummet and technology improves we could probably run on renewable energy alone and won’t have to pay another cent on electricity bills again.