Home News WHAT TO DO WHEN YOUR BREAKER TRIPS

It’s generally an easy fix when your circuit breaker trips, but what’s also important to know is why it trips so that you can prevent it happening in the future.

In very rare cases your breaker may be faulty which causes the trip but in most cases, the breaker, or fuse is just doing its job when it pops. Our circuit breakers are designed to trip and turn off power when any of the following dangerous situations occur.

A short circuit is a more serious reason for a breaker tripping. A “hard short” is caused when the active wire (red, white, blue) touches another active wire or touches a neutral wire (black). But sometimes a short circuit occurs not because of the circuit wiring at all, but because of a wiring problem in an appliance or device plugged into an outlet along the circuit. Short circuits, therefore, can be a bit difficult to diagnose and fix unless you have the correct test equipment.

Another type of short circuit, a “ground-fault,” occurs if an active wire comes in contact with anything conductive which touches earth (the ground). Ground faults can be especially dangerous when they occur in areas with high levels of moisture–like kitchens or bathrooms. There are steps you can take to identify and fix a ground fault, but also essential steps you should take to prevent one from occurring in the first place.

Now that we know why a circuit trips and how to prevent it in the future we can go into what you should do when your breaker trips.

In instances where you have an overloaded circuit it is really easy to fix you just follow our steps below:

In more serious cases such as ground faults or short circuits, you should definitely consult with a professional electrician. If you notice that there are regular outages, smell burning or notice signs of deterioration (such as scorching, rusting or corroding around you breaker) you should contact your local electrician immediately.

Ignoring electrical failure can result in fires and other home and life-threatening problems. 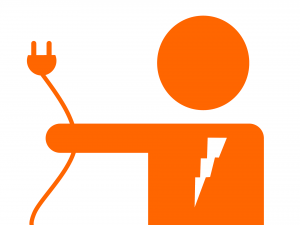