Home News WHAT IS A TERMINAL BLOCK?

What Is A Terminal Block?

A terminal block (also called a connection terminal or terminal connector) is a modular block with an insulated frame that secures two or more wires together. It consists of a clamping component and a conducting strip. A typical simplest terminal block is as shown in the image below.

The insulating body of a terminal block houses a current carrying element (a metal strip or terminal bar). It also provides a base for clamping element. The body has a mounting arrangement so that the block can be easily mounted on or unmounted from a PCB or a mounting rail. Most terminal blocks are usually modular and mounted on DIN rail. That allows us to increase the number of terminals according to the requirements. Terminal blocks keep connections much more secure and wire’s well organized.

Electrical terminal blocks can be classified on the basis of structure, device type, termination options etc.

Dual level terminal blocks: These blocks have another level of connection terminal stacked on the first one. This arrangement is generally used to save space.

Three level terminal blocks: Just like dual level blocks, these have an extra level at the top. An advantage of using multilevel blocks is that multiple connections can be made in the same block.

These blocks often look like a single level feed through terminals. The exception is that these blocks and the metal connection where the wire is terminated are grounded to the panel or DIN rail on which the block is mounted.

These are similar to the pass-through blocks with an exception of the metal connection strip is replaced with a fuse. Therefore, the wires will be connected through a fuse providing an added protection.

I/O blocks are used to make a connection between a device and a controller. Whereas, sensor blocks handle three or four wire devices such as proximity sensors.

These blocks allow wires to be easily disconnected just by lifting a lever or knife switch. They can be used for convenient disconnection and connection without removing the wires. They are also known as switch blocks.

These blocks are used in electrical power distribution. An electric power distribution terminal block is a convenient, economical and safer way to distribute power from a single input source to multiple outputs. One large wire is connected to the input terminal of the block and multiple output terminals are provided at the output. This way, wires are well arranged in a control panel giving it a neat, clean and professional look. 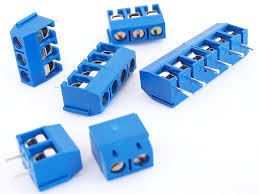 Spring clamp: These type of terminals use spring pressure to retain the wire clamped. Spring clamps are a newer alternative to screw clamps and are generally used for relatively small wires.

Insulation Displacement Connector (IDC): These connectors do not require us to strip the insulation for contact. We simply need to insert the wire without stripping the insulation, and the two sharp metal blades inside the terminal will cut through it to the conductor making proper contact.

Barrier terminal block: These are used where vibration is an issue. A spade or ring terminal is attached to the wire and then inserted into a bolt and tightened with a nut on the terminal block. This prevents loosening of the wire due to vibrations.