Home News THE KITCHEN EVOLUTION: HOW APPLIANCES ARE EVOLVING NOW AND IN THE FUTURE

If you’re tired of your old cooking appliances not being able to heat and cook your food accurately, don’t despair. With the advances being made in technology, major improvements are being made in the microwave, stovetop and ovens of old that will make life in the kitchen so much easier.

WAVE OF THE FUTURE
Most of us have one in our kitchens, but did you know that the microwave oven we know and love today is changing? That’s because scientists have found another way to encapsulate energy to heat, thaw and cook our food quickly.

Instead of the magnetron technology used in the microwaves of old, new ovens are being upgraded with something called solid-state RF energy, which uses radiofrequency to cook food more evenly.

Said to be more robust, energy efficient, and accurate, RF cooking will not only be applied to microwaves but to a wide variety of cook ranges, which will allow you to cook a whole meal at once while retaining the food’s nutrients and moisture.

A SMARTER WAY TO COOK
A wide variety of home and kitchen appliances, including ranges and ovens, are being adapted with the latest smart technology. Those wanting to upgrade their old cooking appliance with one that uses smart technology, such as voice activation temperature control, will soon be able to see what’s in store.

Some countertop and wall ovens are being installed with cameras so that you can observe the cooking process while away from the kitchen, while other models will have sensors to alert you when your cake or baked ham is ready. 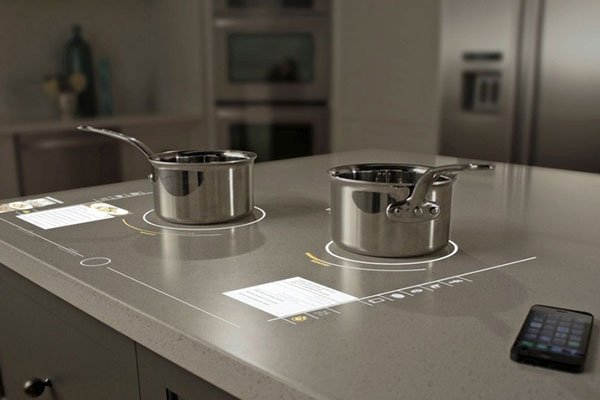 INTRODUCING INDUCTION
Induction heat is said to have all of the benefits of cooktops found on electric and gas ranges, without the dangers. That’s because induction heat cooktops don’t need gas or a pilot light to ignite them because there is no flame involved.

They are also able to stay cool on the surface while still being able to boil water in an iron or stainless steel pot. That’s because they are heated by an electromagnetic coil located underneath the ceramic cooktop that reacts with the metal of the vessel.

Once you remove the pan or pot from the burner, the cooktop immediately cools as the reaction ends.

Induction heat can boil water in half the time of a conventional stove top method and also cooks more evenly as it creates fewer hot spots.

COOKING WITH STEAM AND CONVECTION
Another cooking appliance that is clearly making waves, with all the appliance reviews written about it, is the combo steam and convection oven. Found on wall, countertop and range models, these ovens use a fan that circulates air inside the oven cavity. This helps transfer the heat and helps bake, roast or broil your food faster and more evenly.

Said to be a healthier way of cooking, the steam inside the oven is generated by placing water into a special reservoir. Heat from the oven then generates the steam. This helps to retain the moisture as well as important vitamins and minerals in your food.