As December heats up around the country, for many, summer’s swelter will mercifully be kept in check by air conditioning. The technology has had a profoundly comforting impact on modern life, and about 87 percent of homes these days have some form of air conditioning.

So how does a typical air conditioning unit work and keep you sane during the heat of summer? The basic concept is that a chemical called a refrigerant loops from inside the home to outside and back again, absorbing and casting out heat in the process. The refrigerant cools and then re-enters the home, starting the cycle anew.

Air conditioners run on refrigerants which are chemically known as hydrochlorofluorocarbons or HCFCs.

These chemicals go back and forth from a liquid to a gaseous state very easily, and it is these so-called phase transitions that make HCFCs so useful as refrigerants.

A common phase transition we’ve all seen is when liquid water is heated and evaporates into a gas or water vapour. The same goes for the refrigerant: it absorbs heat in its liquid state, transforming into a gas. The refrigerant is then forced to return to being a liquid, expelling the heat is absorbed and thus made ready to soak up the heat once again.

An air conditioning system essentially has four parts, an evaporator, a compressor, a condenser and an expansion device. 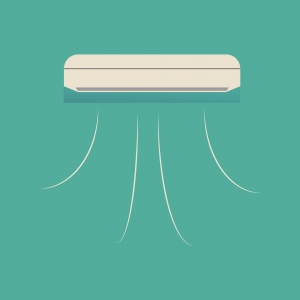 The vaporized refrigerant then passes into the compressor, which is located outside in the air conditioning unit adjacent to a home (or often on the roof of a business), along with the condenser. As the name implies, the compressor compresses the gas to a state of higher pressure and higher temperature.

From there, the hot, pressurized gas flows over the third component, the condenser. Here, the gas is condensed back into its liquid state as heat is radiated away. Outdoor units often have metal fins on them to help dissipate the heat more quickly.

The cooled-off liquid is now returned to the home. The expansion device regulates the flow of liquid refrigerant into the evaporator, where just as before it will absorb heat and change phase from a liquid into a low-pressure gas.

Removing heat is not all that an air conditioner does like it, ahem, conditions the air. Humidity — the amount of water vapour in the air — is a major factor in how our bodies feel the heat; a more humid environment prevents sweat from evaporating off the skin, which helps to whisk away unwanted bodily warmth.

So, in order to render the environment inside a home or business more comfortable, air conditioners also dehumidify.

As the air moves across the evaporator coil, the coil absorbs heat and also wrings out moisture. The air now has a cooler temperature and is drier, so when it comes out of the registers [vents], it mixes with room air and makes the room more comfortable.

All that water leached out of the air by air conditioners can pool in or drain out of the unit, especially on humid days.

The modern air conditioning unit came about with the goal of humidity control. In 1902, engineer Willis Carrier drew up a method to remove irksome humidity from the air at a printing company in Brooklyn, N.Y.

The very first unit by Willis Carrier was not for temperature control, but for humidity control. You got cooling as a byproduct. 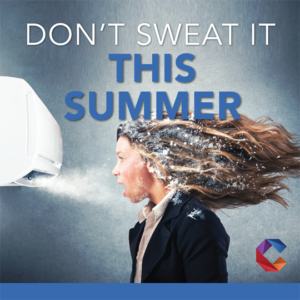