Living in a country that is sometimes so hot that we have to live underground means that air conditioning is more than a luxury in life, it’s a necessity. Over the years with the growing availability of many different types of air conditioners that are easily affordable, demand has also risen.

In fact, it’s probably impossible to some to imagine life without some kind of air conditioner, we rely on it for more than just keeping ourselves cool during summer but also to keep food and medications in our homes safe. Although these appliances seem like a lifesaver to many it also affects and contributes to Global warming.

The reason why they have such a big impact is that these units use a compound called a hydrofluorocarbon (HFC). This man-made substance is made of three components- Carbon, Hydrogen and Fluorine. While this substance allows our air conditioners to work and don’t harm ourselves physically they are classified as a greenhouse gas and are far more effective in damaging our ozone layer than other substances such as carbon dioxide.

And how did we find out about this?

Well back in the late 1970’s scientists realised that we were punching a hole in the ozone layer with our liberal use of a man-made chemical called CFCs in our fridges and air conditioners. Humans heeded this warning, got together in Montreal in 1987, and agreed to stop using CFCs. The Montreal Protocol remains one of the finest examples of international collaboration to protect the environment. To replace the ozone-eating CFCs, we created replacements, HCFCs which are in turn being replaced by HFCs, or hydrofluorocarbons. However, what we didn’t realise at the time was that although HFCs don’t put a hole in the ozone layer they instead are cooking us alive. Their potency as a greenhouse gas is up to 23,000 times that of carbon dioxide and their use is increasing at 10-15% per year. 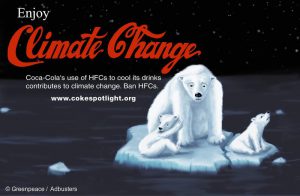 However, like all major threats to our environment, there is something being done! Many Countries and Governments have come together again to help monitor and minimize the use of HFCs such as the Vienna agreement (2016)  which made amendments to the above mentioned Montreal protocol (1987). However, that’s not all!

We have also seen much more experimentation in creating healthy alternatives. One big step was actually created by Greenpeace. Aptly named GreenFreeze this new substance turns from liquid to gas at room temperature and absorbs heat in the process, this new compound is made from various hydrocarbons, propane and isobutane. It has a massively minimal effect on the environment compared to its HFC counterpart and it’s all natural!

The best thing about the Green Freeze is that’s its been proven to work and is more effective than the HFC’s. In fact, once it was approved and legalised in America in 2008 many large companies quickly jumped on board to support this new alternative. These brands include massive corporations such as Ben n’ Jerry’s, Pepsi, Unilever, Red Bull and even Coca-Cola who vowed to remove all HFC’s from their production line.

As air conditioning technicians ourselves we are excited to see these healthier alternatives being implemented around the world and hopefully soon in Australia as well. 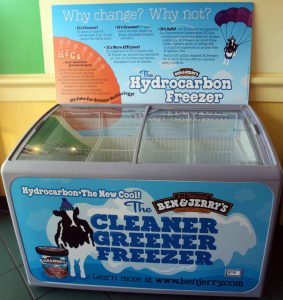